Boots are probably the most important part of your carving linkage - if the boots don't fit well, you aren't going to carve well, no matter what bindings or board you are using. It's especially important for beginners to start off with the right boots.

The most important thing is fit and comfort. Beyond that, there are several important features:

Stiffness: Similar to board stiffness, your weight factors into the optimal stiffness of boots. In addition, a stiffer boot will be more efficient at directing power into the board. You will get better response, be able to change edges quicker, and be able to put the board higher on edge with less effort. However, because of the stiffer suspension, you will feel all the bumps in the terrain, and you will be more susceptible to heel side chatter. With stiffer boots, you will have a narrow margin of error to achieve the right edge balance: if you don't use the right technique, you will either tip over or be unable to get the board on edge at all. Beginners can benefit from either soft or stiff boots - soft boots let you learn a new technique, and stiffer boots force you to use proper technique. The stiffness of a boot is determined by:

Cuff height: A taller cuff generally creates more stiffness and provides more power transmission to the board. It also provides more leg support and can minimize bruising and muscle strains.

Binding style: Step-in bindings provide a hands-free method for your boots to engage the binding. Step-in systems for hard-shell boots come in several flavors: rat trap, Intec, Burton Physics, F.A.S.T., and pin-latch. The rat trap style uses a latch mechanism and does not require modification to the boots. The Intec and Physics systems have a spring-loaded locking mechanism in the heel piece of the boots, whereas the F.A.S.T. system has a spring-loaded locking mechanism in the heel section of the bindings. The pin-latch mechanism, such as the one sold by G-Style, uses pins in the heel that mate with a latch in the binding. If you opt for Intec, Physics, F.A.S.T., or pin-latch step-in bindings, you must buy replacement heels for your boots that work with the bindings. For Intec, Physics, and F.A.S.T. and pin-latch, all the force is put on the replacement heels, so you should periodically check the bolts that hold the heels in place to make sure they don't loosen and fall out. Carvers have been known to discover (either before or after it's too late) that their heels have been held in by loose bolts.

Cuff cants: Boots usually have cuff cant adjusters on the inside and/or outside ankle, which allow you to align the cuff of the boots to match the shape of your ankle and leg (pronation/supination). These cant adjusters are not to be confused with binding cants, which rotate the entire boot along the toe-heel axis. To adjust the cuff alignment, loosen the cant adjusters, flex forward in the boot, and while you are flexing, have someone tighten the cant adjusters. Some bootfitters use a plumb bob: suspend the plumb bob from your knee, and as you flex your knee forward, the plumb should stay on a path that passes through the center long axis of your foot. Boots can have cant adjusters on both sides of the ankle (like the Raichle SB series), or just one side of the ankle (Raichle AF series). Make sure that you tighten the cuff cants when you are carving. There is one boot model that does not allow the cuff cants to be tightened: the old Burton Freecarve boots, and as a result, these boots are not recommended for carving.

The cuff cant adjusters can also influence stiffness and forward lean: For boots with cant adjusters on both sides of the ankle, the boot cuff can be moved up or down without changing the lateral canting. Usually, moving the cuff down causes the cuff to press against the boot shell, which stiffens the boots and also increases the forward lean.

Liner: The liner should conform to your foot, and it should be warm enough to keep your toes from going numb. The best option is a fully-moldable thermo liner, such as the ones provided by DeeLuxe, and the newer Virus boots. The liner is what ultimately determines the comfort of the boot. In general, hard boots with a fully moldable thermo liner are as comfortable as soft boots. In addition, if you need bootfitting modifications, the bootfitter will likely remove layers from the liner in spots that are causes excessive pressure.

The lean/flex adjustment mechanism on the back of hard boots allows you to set the fore/aft flex stiffness and/or lock in a forward lean position:

For the 2005/2006 season, Bomber introduced the BTS (Boot Tuning System), a Raichle/DeeLuxe-compatible lean adjuster with long springs that have a constant flex. The new adjusters are compatible with all AF and SB Raichle boots except the old SB121, Snowboarder, and Concordia. Most carvers will want to replace the RAB system on AF700s with the BTS, and the BTS can also provide constant flex for the AF600. The constant flex will be a boon to any carver, and particularly useful for people doing ExtremeCarving. 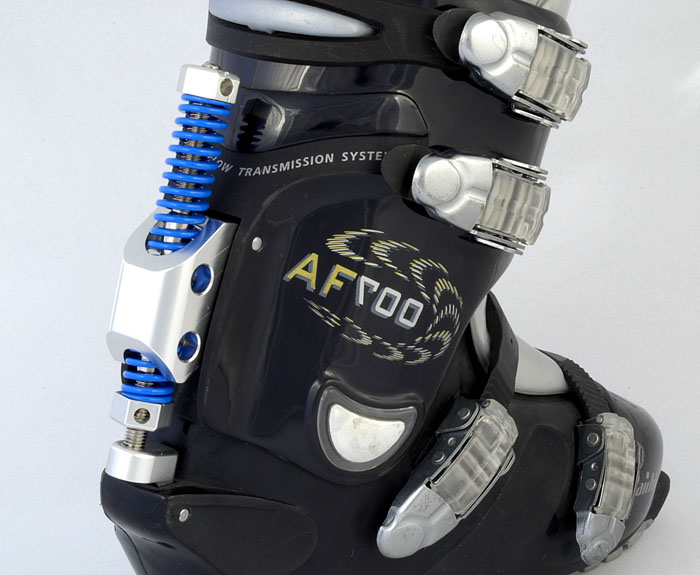 A few guidelines on the BTS:

Manufacturers make different types of lean/flex adjustment mechanisms. The type of mechanism best for carving is a personal preference. Here are some examples:

One limitation of the Raichle and Head spring-based lean adjusters is that flex compression is provided only on toe side when flexing the boot forward. Which means that on heel side, you'll feel the bumps and crud more. Ideally, lean mechanisms should provide balanced compression, both when flexing forward and when pressuring the boots upright. UPZ/UPS and Burton Wind/Fire boots have springs for both forward and rearward flex.

The ExtremeCarving people have developed various custom modifications for the RAB lean adjuster:

You can carve in soft boots/bindings on a BX or all-mountain board. If you go with softies for carving, stiffer boots and bindings provide better performance. There are several possibilities: 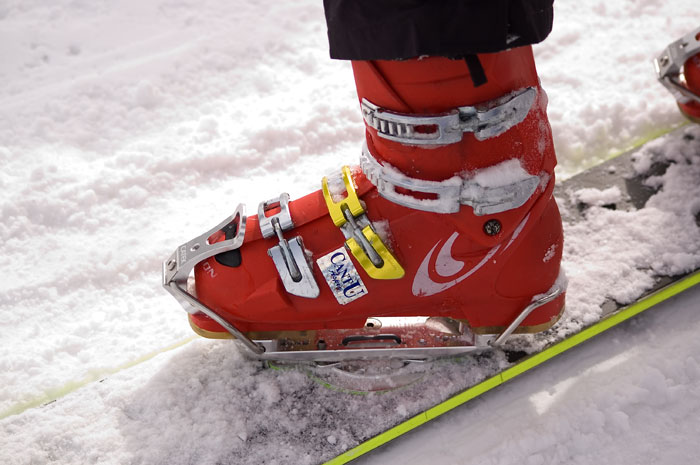 You can carve in ski boots, which can provide maximal stiffness and a high cuff. However, a carving setup in ski boots allows for a very narrow margin of error. While you are trying to learn, a ski boot setup will knock you around on anything other than perfect groomers, and you'll wind up fighting your equipment. People who start off carving in ski boots and later switch to snowboard boots often discover after the fact that ski boots were blocking their skill development. Avoid starting off on the wrong foot - It's a bad idea to use ski boots even when "trying out" carving gear, because you will quickly decide that you hate it. There are a few scenarios where ski boots are of use:

When using ski boots, there are several issues to consider:

In 2006, Dalbello has purchased the rights to manufacture a re-make of the old Raichle Flexon Comp ski boot, with design assistance from Glen Plake. Two boots are available: The Dalbello Krypton Pro, and the Krypton Cross (wider, with a softer flex). The boots will use the three-piece Cabrio design with a tongue, which provides a constant soft forward flex. This boot design was adopted years ago by some alpine racers and carvers, and may be of interest to carvers who normally ride with ski boots.