There are 3 major hard boot manufacturers for the US/Europe: DeeLuxe, Head, and UPZ/Virus. In addition, G-Style makes boots for Japan.

DeeLuxe is the brand name that continues the Raichle line of hard boots (pronounced RIGH-Clee).

Head bought out Blax, and starting in '01, the Head boots are a continuation of the Blax line. 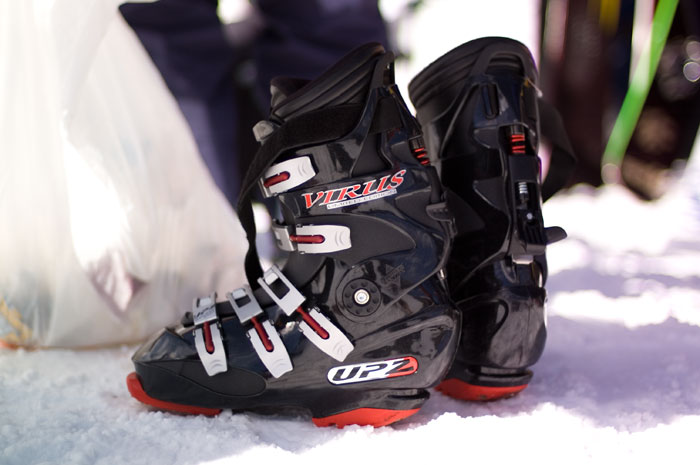 Virus has their own private-label version of the UPZ boots.

UPS Boots changed their name to UPZ starting in '05. UPZ produces one model, the 5 buckle RSV Superlight, constructed from Polyamide 12 Nylon-Plastic. They are 30% lighter than previous boots and maintain a constant stiffness across a wide temperature range. They include liners with separate heat-moldable areas that self-mold to your foot. The boots come with F.A.S.T. heels, and are specifically designed for Snowpro bindings, which means the boot-to-binding interface for this combination is rock solid. They can also be fitted with Intec heels. Some vital statistics:

Some notes about Burton hard boots:

The G-Style line of hard snowboard boots in Japan. They seem to be expanding their product line, so alpine must be growing. They offer several models:

No longer sold, but plentiful on eBay.

Northwave: The .900 and .950 models (4-buckle + strap) were last manufactured for the 1999 model year. Other models included the .850 and .350. They are preferred by the ExtremeCarving people because they have the perfect progressive flex for ExtremeCarving, and they have a short sole base. However, they are not Intec compatible. Unfortunately, the Northwave people threw away the molds, so there is basically no hope that these will be brought back to market. Northwave also made the Nexus model.

Dalbello: Dalbello previously manufactured the DSM brand in Italy but did not import them into the US. Dalbello is the OEM for Head, Burton, and Voodoo.

Koflach: Made in the late 80s, these fluorescent yellow boots featured built-in pink gators, along with Vibram soles that make them great for AT riding. 2-buckle + strap. They came in the Valuga and Albona models. Favored by Damien Sanders.

Kastinger: They made boots in many different models, ranging from Vibram-sole boots with no buckles (lace-up) to 4-buckle race boots.

Nordica Made several snowboard boots with fully lugged soles. They look quite a bit like the older Raichle 121. These boots are still great for AT touring: