Fine-tuning your binding setup is necessary to squeeze the most performance out of your carving gear. Think of your bindings as precision instruments, with 5 major adjustments: angle, cant, lift, stance width, and setback. There is a fair amount of experimentation involved, because the sport of carving is dominated by personal preference, rather than conventional wisdom.

Don't allow your boots to overhang the edges of the board, otherwise your toe or heel will drag in the snow, and possibly cause your board to lose an edge, a situation known as "boot-out." Also, toe boot-out on the back foot can cause you to auger the nose when you are carving on heelside. If your rear binding comes loose and starts to swivel, your rear boot will probably swivel outward, causing your rear toe to overhang past the edge of the board. The extreme toe overhang cause the back of your board to lift up, which causes all of your weight to be transferred to the nose of the board, resulting in a cartwheel. Other boot-out countermeasures:

Technically, cant is the angle at which your foot rotates around the toe/heel axis. Lift can actually have two different meanings depending on the context - riser lift or built-in lift are terms for the overall height of the bindings above the board, whereas lift or heel/toe lift are terms for the angle between the toe/heel axis and the surface of the board. binding lift is ambiguous. For binding cant/lift, we are talking about heel/toe lift. The cant/lift of bindings is partly a personal preference. For GS carving, most carvers use a binding setup where the front foot is canted inward and lifted at the toe, and where the back foot is canted inward and lifted at the heel. The following advice applies to GS carving:

Bias is the fore/aft position of the toe/heel blocks on the binding. Some considerations for bias:

The stance width is the center-to-center distance between the two bindings. In the US, stance width is often measured in inches, despite the fact that every other parameter of a snowboard is in metric. Stance is like binding angle - you don't determine it theoretically, but instead, you adjust it until it feels right. However, there are three common recommendations for a starting point for setting stance width:

On the other hand, a narrow stance will allow you to carve tighter turns, and transition from edge to edge a little quicker.

After you shift your weight forward to initiate a turn, your center of gravity should be over the apex of the sidecut. In order to achieve this geometry, the midpoint between the two bindings must be set back from the apex of the sidecut to compensate for the forward weight shift. The apex of the sidecut is the center of the effective edge, not the center of the board length. This setback is typically 2-4 cm. Board makers shift the two insert packs rearward by this amount, so that you can mount your bindings symmetric to the insert packs and get the right setback. Some manufacturers, like F2, specify on the topsheet pre-marked stance positions so that you know where to mount the bindings to achieve the recommended setback. If there are no pre-marked stance positions, mount your bindings symmetrical with respect to the hole pattern. However, binding setback has a large impact on carving performance, so it's something you should spend some extra time tweaking:

The location of your center of gravity is determined by the setback and also the cant/lift settings, so you have to keep both in mind.

However, some people use lifts (also known as risers) to raise the height of bindings off the board. Lifts have long been used by skiers, and provide a few benefits for snowboarders:

Bindings provide varying amounts of built-in lift: F2, Phiokka Highlander, Phiokka Macho, and Burton race plates are the lowest-profile, with Bomber step-ins and Cateks sitting higher. Some bindings, like the Nidecker freecarve step-in, provide a ridiculous amount of lift - almost 4 cm. There are a few riser options available if you want to increase the lift of low-profile bindings: 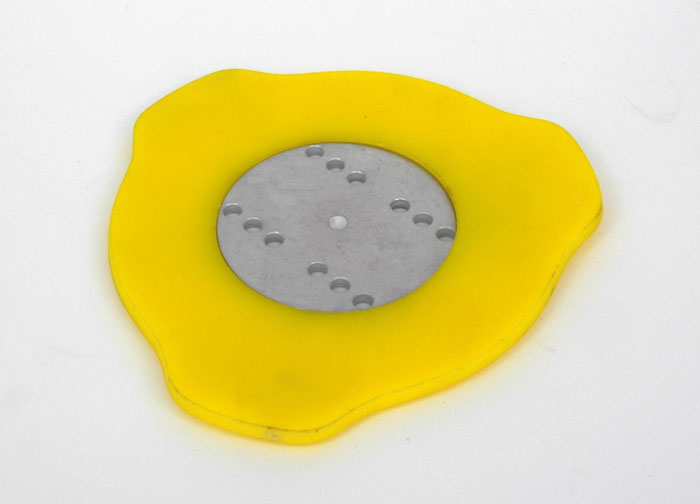 A close-up of the Bomber suspension kit. It is available with a 3D or 4x4 pattern.

In addition to risers, you can also buy dampening plates that bolt onto the topsheet. If you are considering going with a dampening plate, you might want to consider a custom snowboard with built-in dampening, like the newer F2 boards that have an integrated Conshox. However, some racers still use dampening plates in competition:

After you have set your binding angle, cant/lift, boot lean position, stance width, and setback, check to make sure that your setup allows a sufficient range of motion:

Carving is a sport of tweaking, followed by micro-tweaking, since carving performance is greatly affected by even small changes in any of the following settings:

Every degree counts, and millimeters can make a difference. Some carving gear even has vernier adjustments: the Emery Course bindings have a set of vernier offsets to allow 1 º resolution. When adjusting bindings, it helps to be really anally-retentive (as measured in sphincter-newtons). In carving, there is always an element of uncertainty as to whether your performance is limited by your equipment settings, or your technique. Even as an advanced carver, you will be constantly experimenting and tweaking with these parameters in a quest to find the single adjustment that provides a breakthrough in carving performance. If you have Cateks, tweaking will become an obsession and lead to a downward spiral of psychosis - they are not advised for people with obsessive-compulsive disorder. Take small steps and change one parameter at a time. It also helps to swap things out one at a time, like boards, boots, and bindings: you can isolate how each part of the linkage contributes to carving performance. At the beginning of each season, you will burn a fair amount of time re-dialing all of your settings. Also remember that the surface conditions of the terrain have a huge impact on carving performance.

For these reasons, when evaluating carving gear like bindings:

And finally, everyone seems to be fixated on what the big guys use, so here is the latest intelligence: